High-level performance analysis (including memory usage) can be performed with the Windows Performance Recorder (WPR) and Windows Performance Analyzer (WPA). As the names suggest, WPR is for recording system statistics (in the form of event trace log a.k.a. ETL files), while WPA is for analyzing these ETL files.

WPR collects system wide statistics, so it won't just record things relevant to rustc but also everything else that's running on the machine. During analysis, we can filter to just the things we find interesting.

These tools are quite powerful but also require a bit of learning before we can successfully profile the Rust compiler.

Here we will explore how to use WPR and WPA for analyzing the Rust compiler as well as provide links to useful "profiles" (i.e., settings files that tweak the defaults for WPR and WPA) that are specifically designed to make analyzing rustc easier.

In order to perform system analysis, you'll first need to record your system with WPR. Open WPR and at the bottom of the window select the "profiles" of the things you want to record. For looking into memory usage of the rustc bootstrap process, we'll want to select the following items:

You might be tempted to record "Heap usage" as well, but this records every single heap allocation and can be very, very expensive. For high-level analysis, it might be best to leave that turned off.

Now we need to get our setup ready to record. For memory usage analysis, it is best to record the stage 2 compiler build with a stage 1 compiler build with debug symbols. Having symbols in the compiler we're using to build rustc will aid our analysis greatly by allowing WPA to resolve Rust symbols correctly. Unfortunately, the stage 0 compiler does not have symbols turned on which is why we'll need to build a stage 1 compiler and then a stage 2 compiler ourselves.

To do this, make sure you have set debuginfo-level = 1 in your config.toml file. This tells rustc to generate debug information which includes stack frames when bootstrapping.

Now that the stage 1 compiler is built, we can record the stage 2 build. Go back to WPR, click the "start" button and build the stage 2 compiler (e.g., python x build --stage=2 -i library/std ). When this process finishes, stop the recording.

Click the Save button and once that process is complete, click the "Open in WPA" button which appears.

Note: The trace file is fairly large so it can take WPA some time to finish opening the file.

Now that our ETL file is open in WPA, we can analyze the results. First, we'll want to apply the pre-made "profile" which will put WPA into a state conducive to analyzing rustc bootstrap. Download the profile here. Select the "Profiles" menu at the top, then "apply" and then choose the downloaded profile.

You should see something resembling the following: 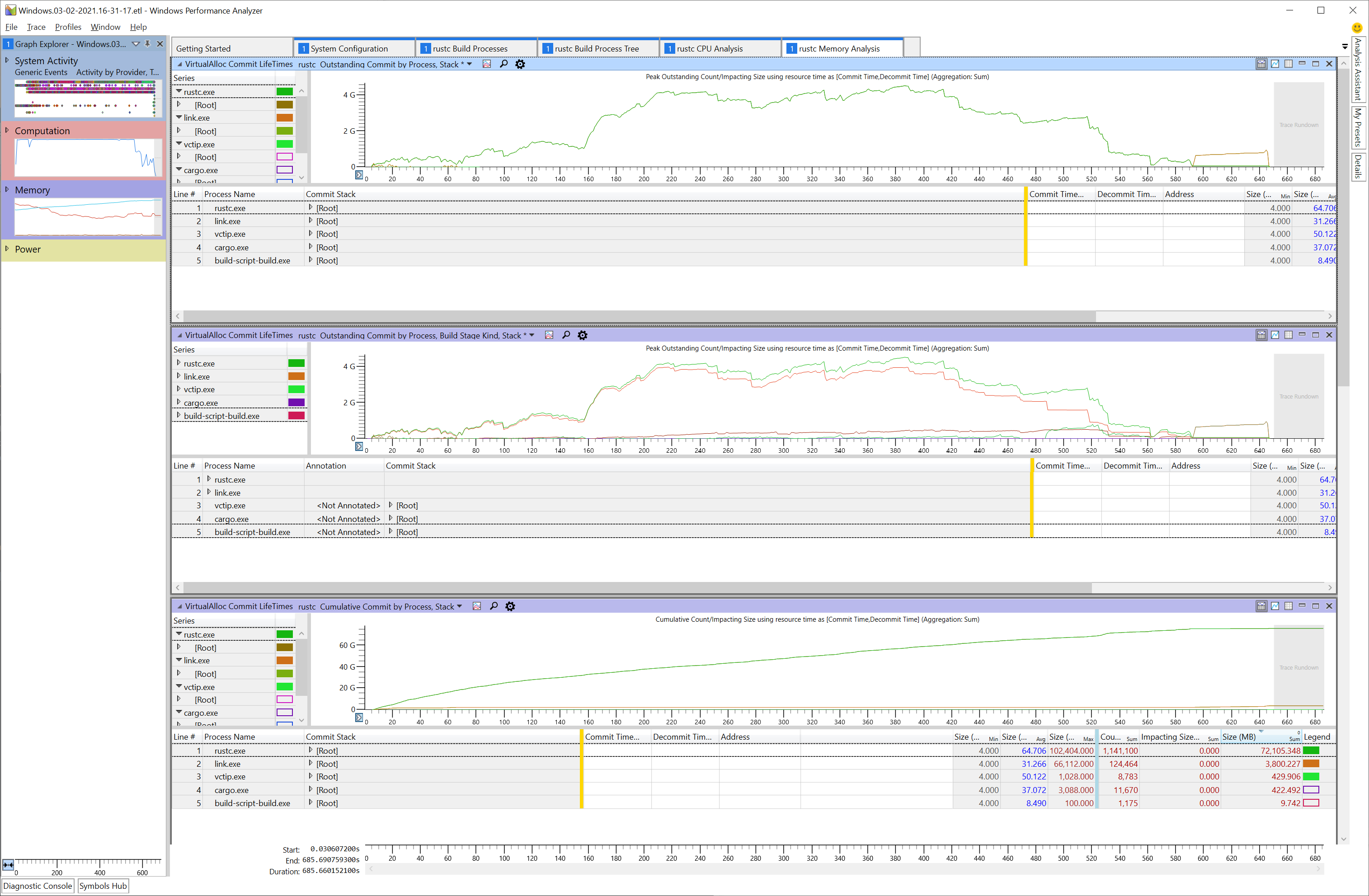 Next, we will need to tell WPA to load and process debug symbols so that it can properly demangle the Rust stack traces. To do this, click "Trace" and then choose "Load Symbols". This step can take a while.

Once WPA has loaded symbols for rustc, we can expand the rustc.exe node and begin drilling down into the stack with the largest allocations.

To do that, we'll expand the [Root] node in the "Commit Stack" column and continue expanding until we find interesting stack frames.

Tip: After selecting the node you want to expand, press the right arrow key. This will expand the node and put the selection on the next largest node in the expanded set. You can continue pressing the right arrow key until you reach an interesting frame.

In this sample, you can see calls through codegen are allocating ~30gb of memory in total throughout this profile.

The profile also includes a few other tabs which can be helpful: