If you work on the MIR, you will frequently come across various flavors of dataflow analysis. rustc uses dataflow to find uninitialized variables, determine what variables are live across a generator yield statement, and compute which Places are borrowed at a given point in the control-flow graph. Dataflow analysis is a fundamental concept in modern compilers, and knowledge of the subject will be helpful to prospective contributors.

However, this documentation is not a general introduction to dataflow analysis. It is merely a description of the framework used to define these analyses in rustc. It assumes that the reader is familiar with the core ideas as well as some basic terminology, such as "transfer function", "fixpoint" and "lattice". If you're unfamiliar with these terms, or if you want a quick refresher, Static Program Analysis by Anders Møller and Michael I. Schwartzbach is an excellent, freely available textbook. For those who prefer audiovisual learning, we previously recommended a series of short lectures by the Goethe University Frankfurt on YouTube, but it has since been deleted. See this PR for the context and this comment for the alternative lectures.

The interface for dataflow analyses is split into three traits. The first is AnalysisDomain, which must be implemented by all analyses. In addition to the type of the dataflow state, this trait defines the initial value of that state at entry to each block, as well as the direction of the analysis, either forward or backward. The domain of your dataflow analysis must be a lattice (strictly speaking a join-semilattice) with a well-behaved join operator. See documentation for the lattice module, as well as the JoinSemiLattice trait, for more information.

You must then provide either a direct implementation of the Analysis trait or an implementation of the proxy trait GenKillAnalysis. The latter is for so-called "gen-kill" problems, which have a simple class of transfer function that can be applied very efficiently. Analyses whose domain is not a BitSet of some index type, or whose transfer functions cannot be expressed through "gen" and "kill" operations, must implement Analysis directly, and will run slower as a result. All implementers of GenKillAnalysis also implement Analysis automatically via a default impl.

The dataflow framework in rustc allows each statement (and terminator) inside a basic block to define its own transfer function. For brevity, these individual transfer functions are known as "effects". Each effect is applied successively in dataflow order, and together they define the transfer function for the entire basic block. It's also possible to define an effect for particular outgoing edges of some terminators (e.g. apply_call_return_effect for the success edge of a Call terminator). Collectively, these are referred to as "per-edge effects".

The vast majority of analyses should use only the unprefixed effects: Having multiple effects for each statement makes it difficult for consumers to know where they should be looking. However, the "before" variants can be useful in some scenarios, such as when the effect of the right-hand side of an assignment statement must be considered separately from the left-hand side.

Your analysis must converge to "fixpoint", otherwise it will run forever. Converging to fixpoint is just another way of saying "reaching equilibrium". In order to reach equilibrium, your analysis must obey some laws. One of the laws it must obey is that the bottom value1 joined with some other value equals the second value. Or, as an equation:

Having a top value ensures that your semilattice has a finite height, and the law state above ensures that once the dataflow state reaches top, it will no longer change (the fixpoint will be top).

The bottom value's primary purpose is as the initial dataflow state. Each basic block's entry state is initialized to bottom before the analysis starts.

This section provides a brief example of a simple data-flow analysis at a high level. It doesn't explain everything you need to know, but hopefully it will make the rest of this page clearer.

Inspecting the Results of a Dataflow Analysis

Once you have constructed an analysis, you must pass it to an Engine, which is responsible for finding the steady-state solution to your dataflow problem. You should use the into_engine method defined on the Analysis trait for this, since it will use the more efficient Engine::new_gen_kill constructor when possible.

For example, the following code uses a ResultsVisitor...

whereas this code uses ResultsCursor:

When the results of a dataflow analysis are not what you expect, it often helps to visualize them. This can be done with the -Z dump-mir flags described in Debugging MIR. Start with -Z dump-mir=F -Z dump-mir-dataflow, where F is either "all" or the name of the MIR body you are interested in.

These .dot files will be saved in your mir_dump directory and will have the NAME of the analysis (e.g. maybe_inits) as part of their filename. Each visualization will display the full dataflow state at entry and exit of each block, as well as any changes that occur in each statement and terminator. See the example below: 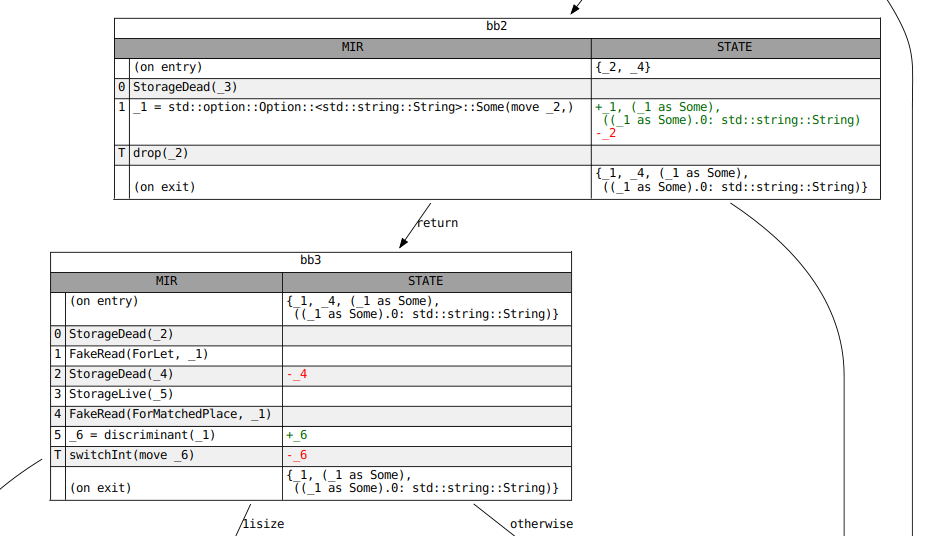